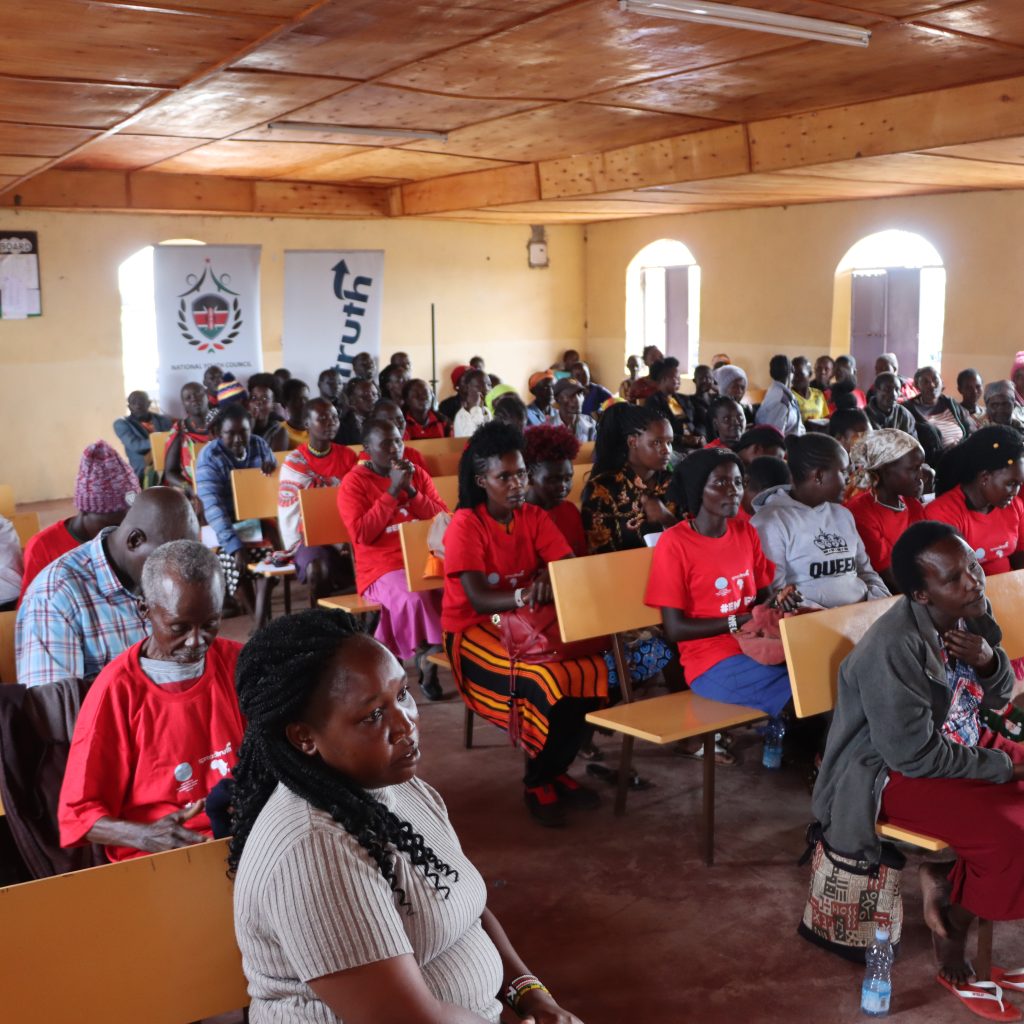 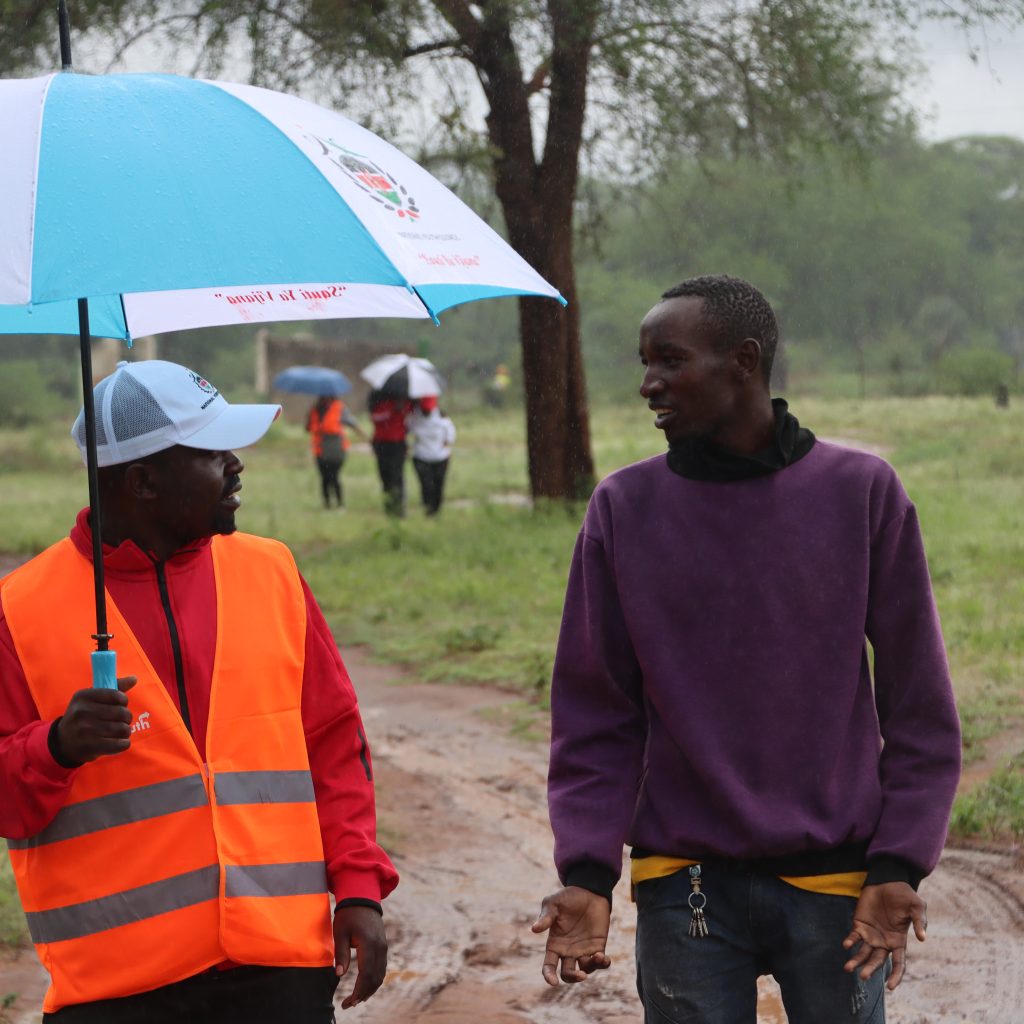 Intercommunity conflicts have persisted in Kerio valley over the past few decades, particularly between the Marakwet community and the Pokot community, majorly due to livestock keeping. Cattle raiding has threatened the lives of families who earn their livelihood in the valley. In 1997 cattle raiders killed over 10 children and their mothers in the Tot area. In 2002, a Pokot raid on Marakwet in the Tot division led to the death of 2 innocent young people. Several months later, a Marakwet community member was shot and killed, and his livestock carried away. A report in the local newspaper indicated that earlier this year, tension had increased in the Chesegon area in Tot due to the merciless killing of a 24-year-old gentleman and severe injuries caused to four others.

The conflicts have resulted in significant humanitarian issues in the area, including displacement of people and schools, reduced inter-ethnic activities, loss of property and livelihoods, insecurity, disruption of social order, and change of traditional family roles.

Early marriages are another crucial issue that have emerged in the area due to conflict. FGM has caused significant deaths amongst girls due to complications while giving birth.

In this regard, the National Youth Council, in conjunction with Spread Truth Africa and the Ministry of Gender, together with other stakeholders, held a two-day Kerio Valley Peace Mission dubbed #ONElifeONEnation on 2nd and 3rd August 2022. This came about after thorough planning accompanied by two days of a fact-finding mission. Spread Truth Africa, which spearheaded the mission with NYC, is a Christian-based nonprofit organization focusing on community evangelism through sports, worship, outreach programs, and humanitarian activities. The fact-finding mission aimed at assessing the viability of the Peace mission in the valley. Guided by the result of the fact-finding activity, the implementing entities were more than grateful to proceed with the ONElifeOnenation Kerio Peace campaign. The peace mission focused on creating an enabling environment for peaceful dialogue between the warring community, promoting peace through community evangelism, addressing FGM and other issues facing young girls and mothers through a well-structured dialogue, namely Sawazisha Gumzo as well as youth inclusion in peace-building activities through cultural diversity celebration and sports activities (Kerio Peace Tournament). 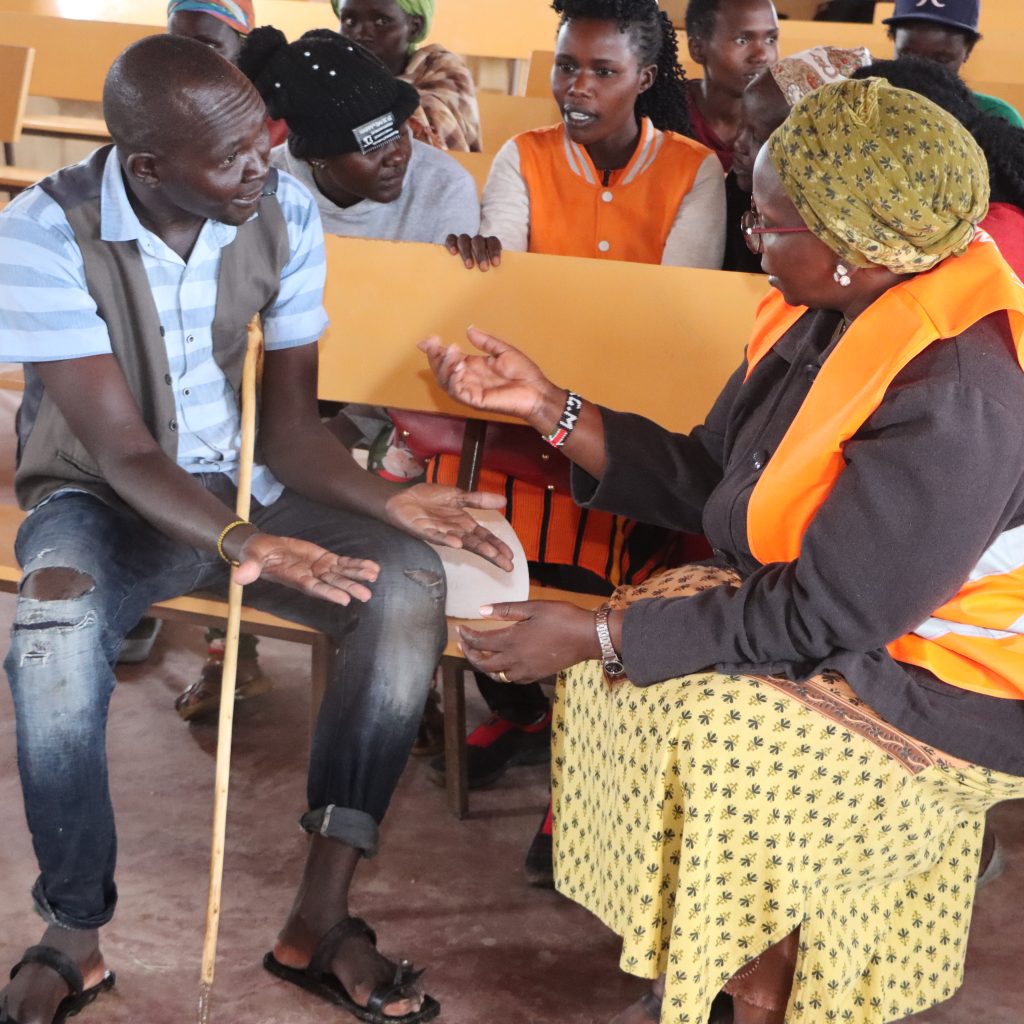 The mission team arrived at the Chesongoch area late evening on 1st Aug 2022 at around 8:00 pm, following several hours of travel. The arrival and welcoming of the guests at St. Teresa Missionary were followed by a brief of the activities to be carried out on the first day, i.e., Sawazisha Gumzo with Morans at Kolowa and Chesongoch(Sawazisha Gumzo is an inter and intragenerational dialogue that focuses on addressing issues affecting us in a normalized discussion), Kikao program with young girls and mothers at Chesongoch and Kolowa area, Pastors training, food distribution, distribution of 1, 200 mango tree seedlings by Kerio Valley Development Authority and the flagging off of the Kerio Peace Tournament finals. Having no other business, the project manager of Spread Truth Africa, Ken Lanyo, led a closing prayer, and the team left for rest.

Everybody woke up psyched up for the much-awaited Kerio Peace Campaign. Despite the delay caused by the heavy rainfall being experienced in the area, everyone proceeded to their respective activity. A team of NYC and Spread Truth Africa were left to conduct organised pastor training in the Chesongoch area; this was spearheaded by Spread Truth Executive director Rev. Hamisi Kirenga HSC. Additionally, another team was left to conduct the Kikao program addressing FGM through dialogue. Ms. Vanessa from Spread Truth was spearheaded and assisted by Yvonne Ndambuki of NYC. The two activities commenced at around 10:am and ended at 4 pm. Later, the team proceeded with food distribution.

The team flagging off the semifinals for the peace tournament proceeded to the venue; Kapkaini Primary School. Had a brief meeting with the school head teacher on matters of peace as they waited for the arrival of prayers. Unfortunately, the heavy rainfall distracted the matches being played.

On our way to the Kolowa area where much of the peace dialogue with morans(Sawazisha Gumzo) and Anti-FGM training(Kikao) was to take place, one of the vehicles transporting the team got stuck in already filled Kerio Valley. The local security team put effort into removing the vehicle. It was later towed after some hours. Crossing the river Kerio was not enough, as we were stuck between the two rivers, Kerio and another seasonal river. We waited for over 2 hours for the water levels to reduce to enable us to cross the river. Despite the hurdles, we got exposure to whatever the community goes through during heavy rains. In one instance, fellow boys assisted a teenage girl on her way home to cross the heavy flowing river. Later to realize the hardship students go through during their studies. At around 1;30 pm, we managed to cross to the other side of Kolowa, having the water levels reduced. The high water levels affected the turnout for the anti-FGM training as young girls could not manage to cross the river. We managed to train approximately 130 young girls and mothers on FGM at Kolowa and 112 at Chesongoch. The team also distributed the Anti-FGM curriculum. The young girls and mothers collectively agreed to champion the elimination of FGM and FGM. 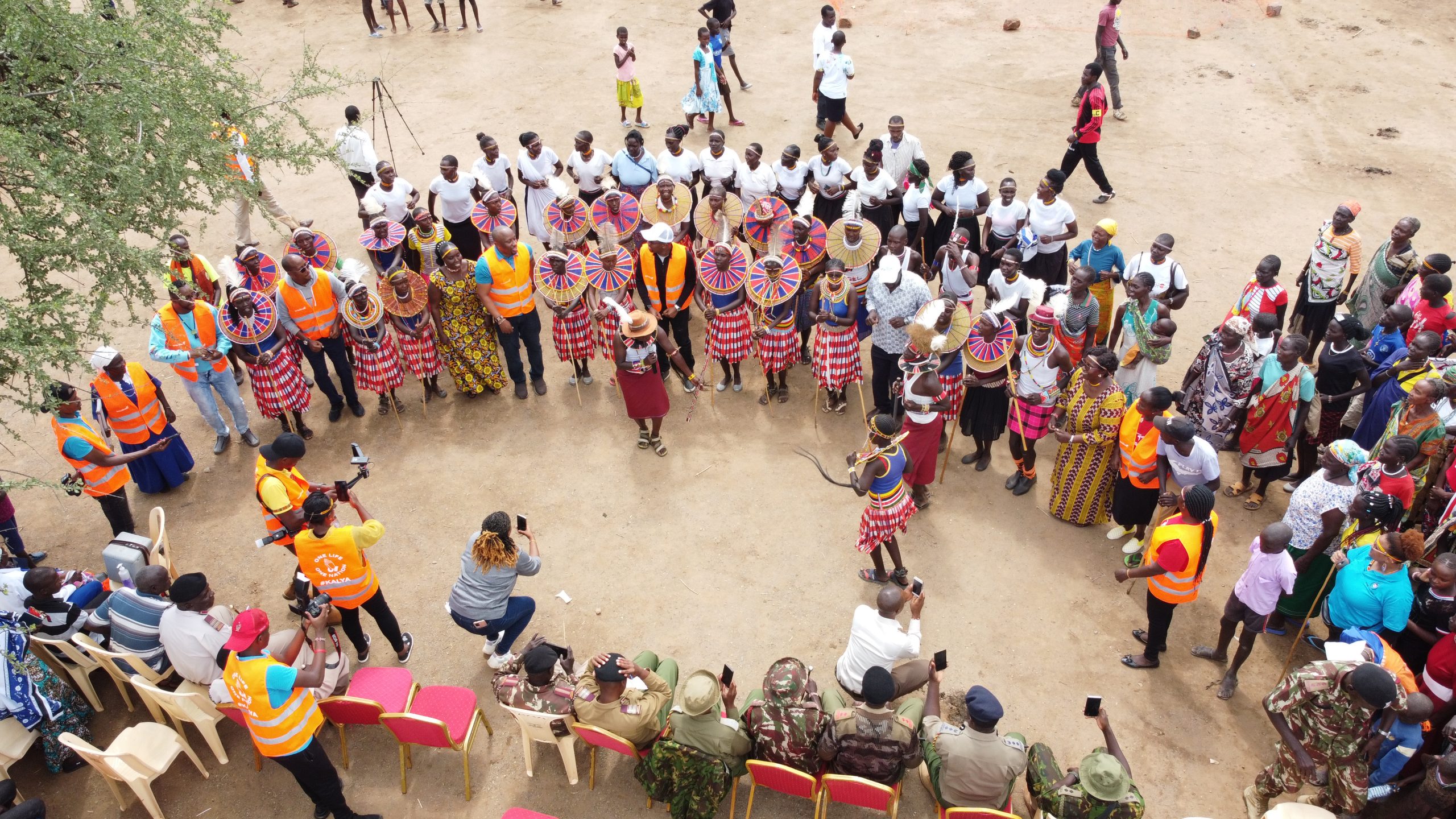 Day 2 of the Kerio peace campaign commenced with a security brief by local police. In the Kolowa area where the Cultural Festival was conducted, everything was set. The cultural festival began with a Peace walk around the Kolowa area, attracting over 500 community members from West Pokot and Marakwet. The Peace walk signified the community’s readiness for peace. Later around 10:00 am, the ref Kerio Peace Tournament finals were kicked with kitting of players spearheaded by SpreadTruth ED Rev. Hamisi Kirenga HSC, assisted by NYC communication and Advocacy head Ms. Wairimu Waeru and Kerio Valley Development Agency chair. The three leaders leveraged the opportunity to address youth on matters of youth. Rev Hamisi urged the use of the aspect of teamwork in sport to preach peace. He also emphasized the importance of peace. In her remarks, Ms. Waweru urged the youth to leverage their energy to champion peace rather than disrupting the region’s sustainability. Various cultural dances presentations followed from Marakwet and West Pokot Communities.

Through the leadership of NYC CEO Mr. Roy Sasaka, Spread Truth ED. Hamisi Kirenga and NYC advisory board director Kunni youth pledged to maintain peace during and after the election. They also pledged to lead at the end of FGM. The winners of the Kerio Peace Tournament, Kapkain FC, were immensely awarded trophies and other merchandise. The eight runners-up were also kitted with uniforms.

Additionally, all the young girls who had completed their FGM curriculum were awarded. The awardees are expected to lead in ending the menace in affected areas. The colourful fest ended with a candle lighting ceremony to mark the community’s readiness for peace and the end of bloodshed.

Lets For Peace
Spread the love